Here are the Court cards, based on the Kings, Queens, Knights and Pages you can find in traditional playing cards. Their roles have been renamed as Fairies, Armors, Vessels and Cities, as I didn't want to keep too much of the royalist/feudal meaning behind the traditional names of the trump cards. Aside from the historical and hierarchical ideas behind knights, kings, queens, and pages, I wanted to make the cards less gendered and less focused on social hierarchies between people when choosing their new names, while focusing on a title which would convey their meaning instead.

The way Court cards unfold represent how a project can go from ideation to completion, through four characters symbolising each step of the way :

Additionally, they also share the properties of their respective suits :

Fairies represent new projects and ideas, the initial impulse at the root of our plans. As court cards, they also can represent a person or the reader themselves as they are about to take a decision or start a new project. 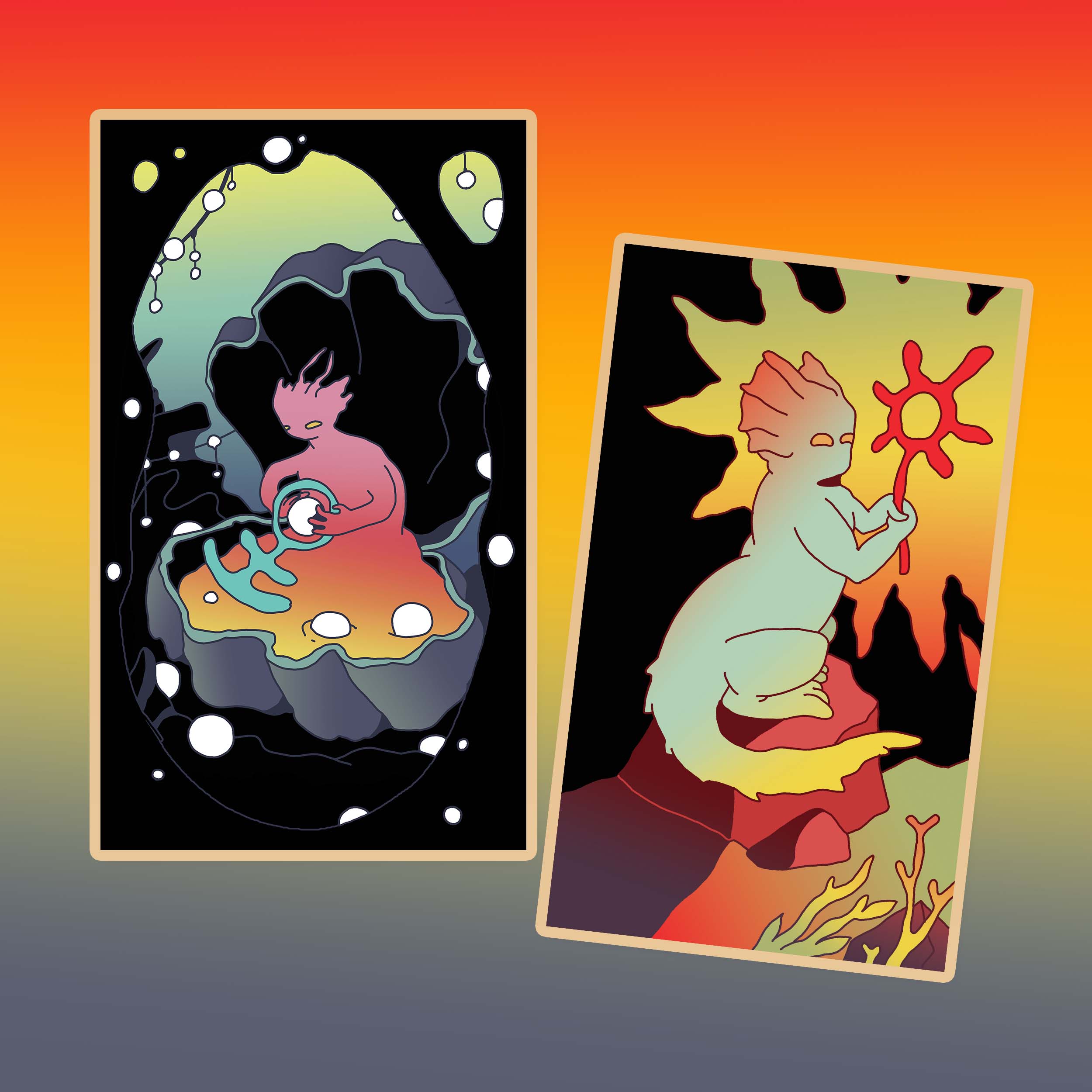 The Fairy of Cups is shaping pearls, sitting in their shell at the bottom of the sea. It represents an idealist and dreamy mindset, focused inwards and towards crative goals. On it's downside it can show a lack of realism or escapism that can hinder our progress, and on it's upside it acts as a reminder of our deep desires and dreams.

The Fairy of Coins initiates new plans grounded in the material world and aimed at developing new skills, financial opportunities and ventures. It can indicate progress or the need to draft a new plan of action, or a warning towards procrastination.

The Fairy of Swords is a thinker whose actions are not always up to the cloud castles they build in their minds : we can see them dashing looking away from their sword. However, they are goal-driven, ambitious, and inventive if given the means.

The Fairy of Wands sits in the dark, currounded by the light of a rainbow : it's area of action is within new and unexplored pathways, with unclear outcomes. They are driven by a will to experiment and explore new methods and ideas.

Armors represent our mindset as we act on our plans. As court cards, they can also represent a person or the reader themselves and the way they navigate to their goal. 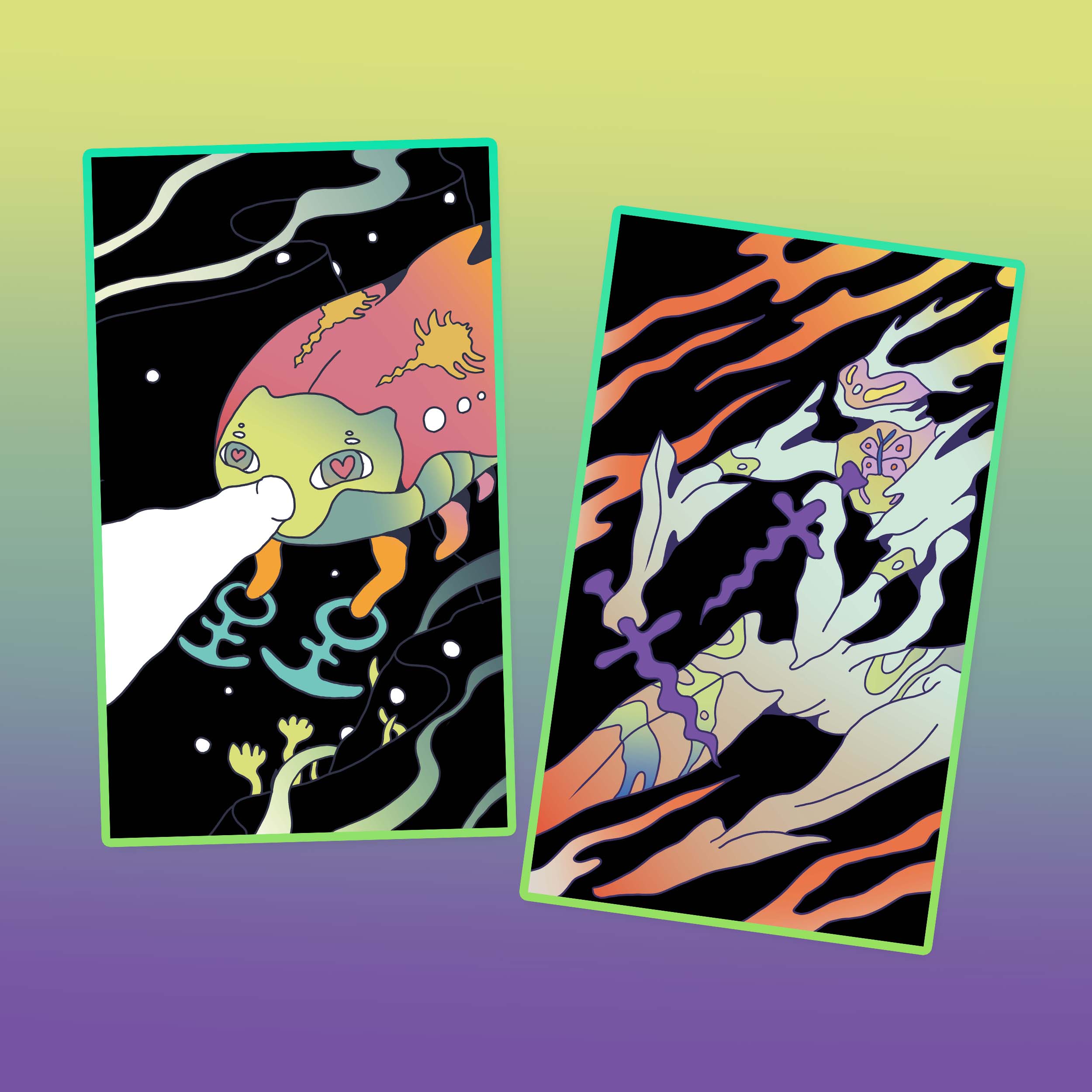 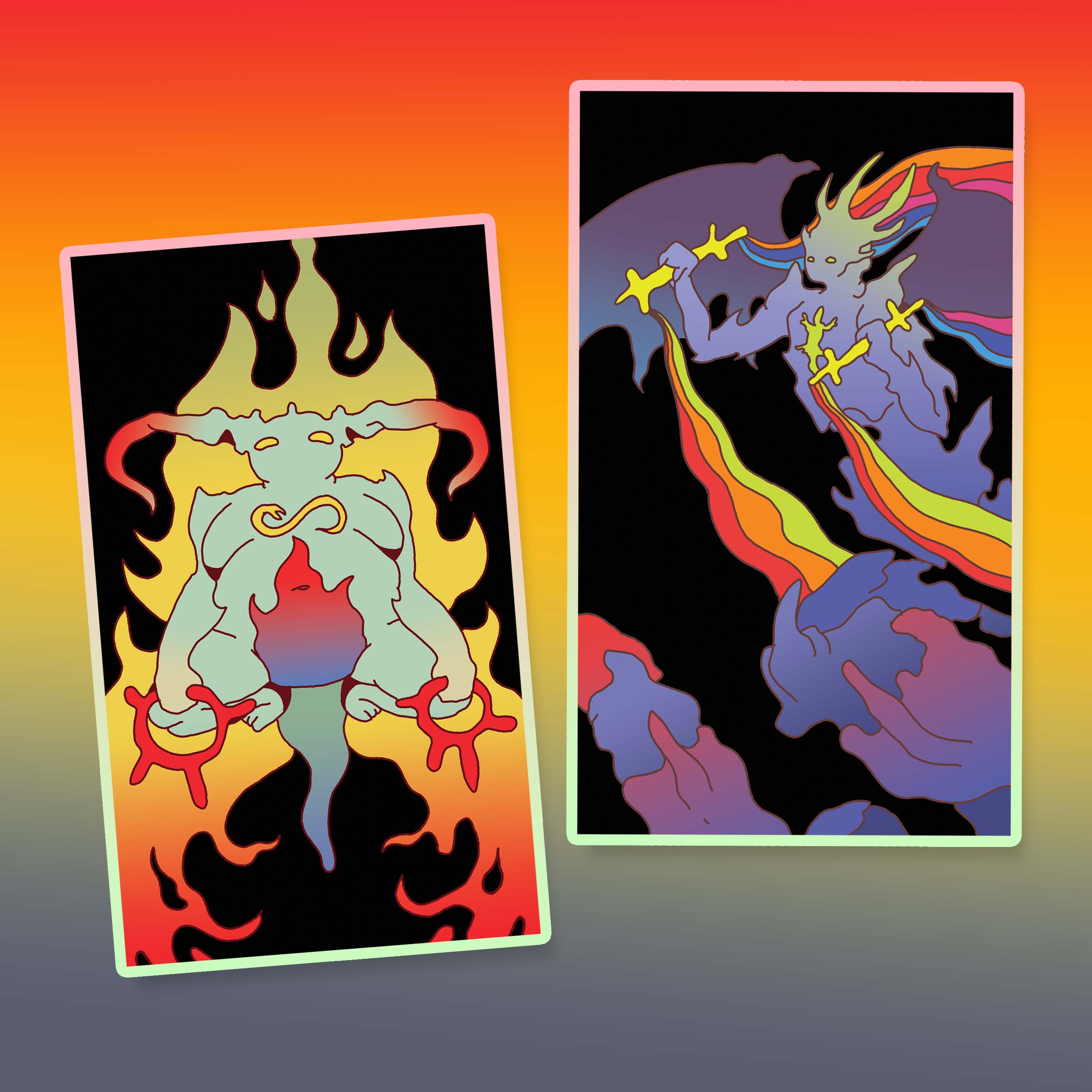 The Armor of Cups swims slowly through dark waters, uncovering unexpected findings with it's bright light beacon. This card represents creativity, inspiration, and intuitive processes and findings. It can represent a form of lack of realism, or can invite us to follow our inspiration.

The Armor of Swords is jumping into action with great energy and aggressiveness : it's inspiring and bright, but potentially careless, violent, or rushing too fast into action without proper thinking beforehand.

The Armor of Coins is sitting still in a defensive and confident stance. It invites us to follow a path of long-term growth, without rushing into action. Patience is key. It can also signify a lack of adaptability and dynamism.

The Armor of Wands springs forth towards unknown horizons. It invites us to explore new pathways and figure our way out through action, as we will figure it out as we go. However, the outcomes of such process are always unclear.

Vessels represent possession, and the ressources we need to accomplish our plans. As court cards, they can represent a person or the reader themselves and their ambitions. They are represented as objects of worship to which we look up and appeal to help us in our path. 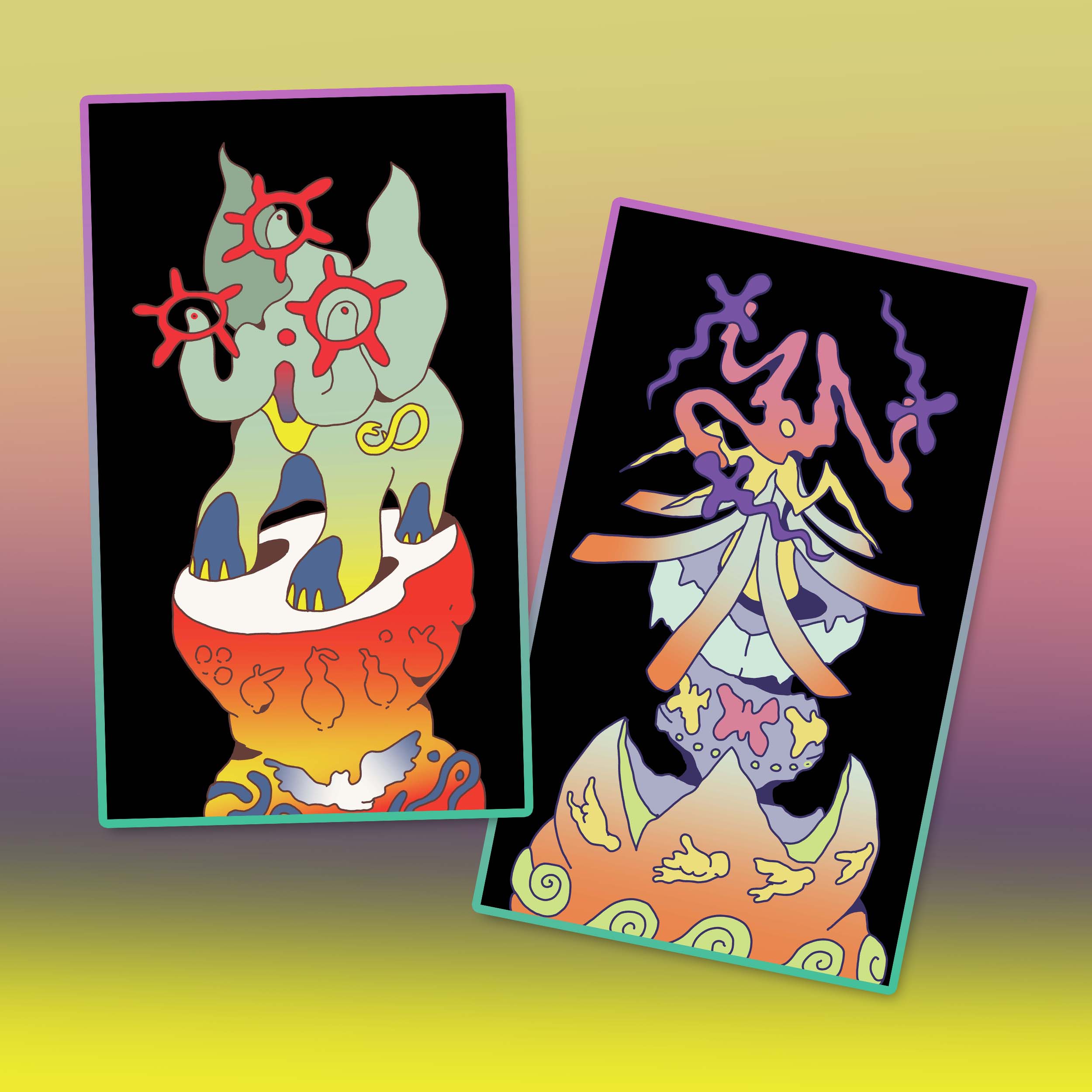 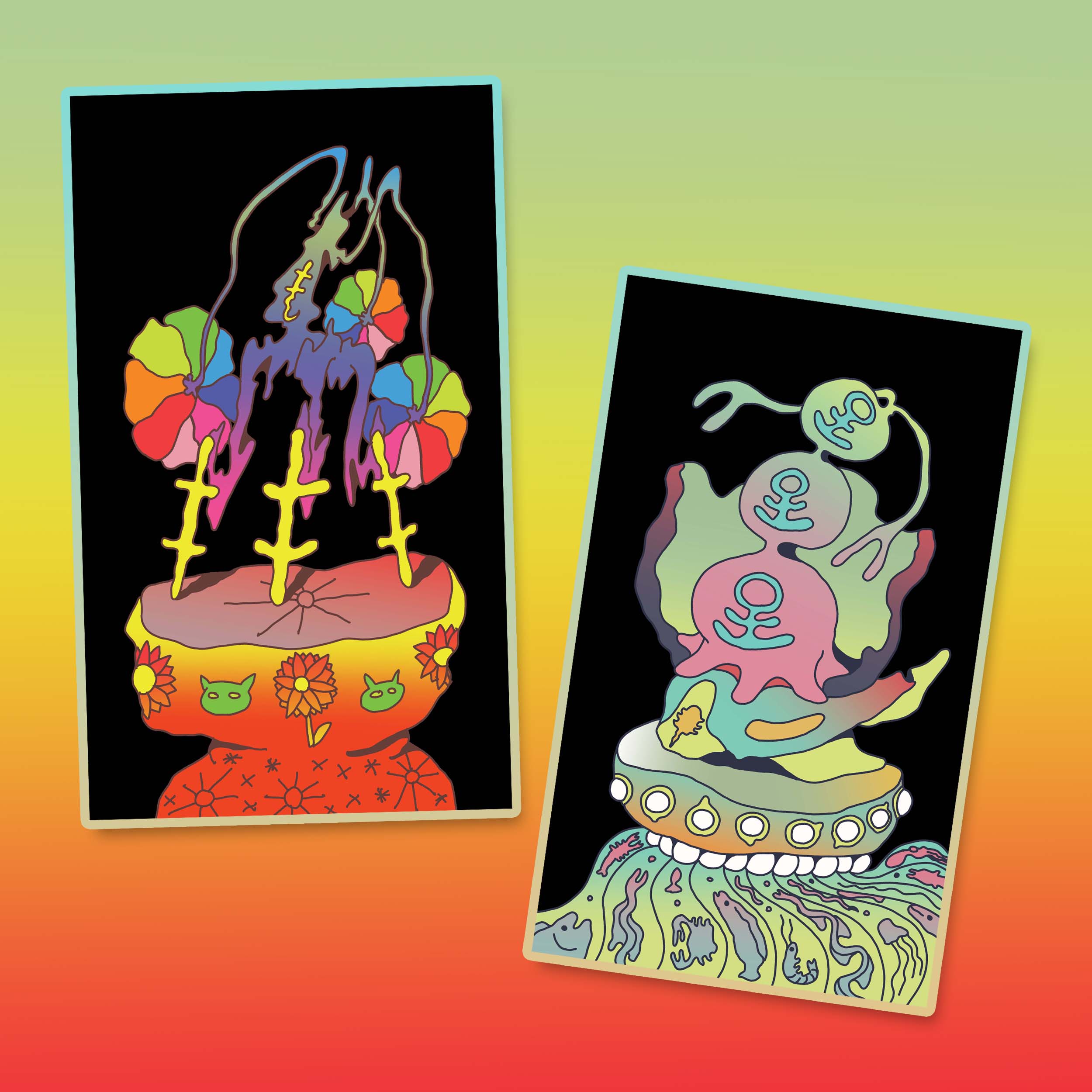 The Vessel of coins represents balance and safety. It's tied to problem-solving, compassion, patience and gratitude. In it's reverse side, it can represent addiction or lack of perspective. It can represent a caretaking figure.

The Vessel of swords is a card of sharp intellect and judgement. It helps us cut through the bullshit and invites to honesty and critical thinking, and helps clarify murky waters. It can represent a mentor, a teacher or someone we look up to to make decisions. In it's reverse side, it's a warning against manipulation and pessimism.

The Vessel of wands stands for optimism, energy anbd self-determination. It's a card full of confidence and cheerful energy, which can also represent someone you find inspiring or a role model. In it's downside, it can represent jealousy, egoism and unsecure feelings.

Cities represent achievement. They represent the end-goal of our plans and the rewards we may get from it. They are represented by megastructures where the different parts work together as a whole. 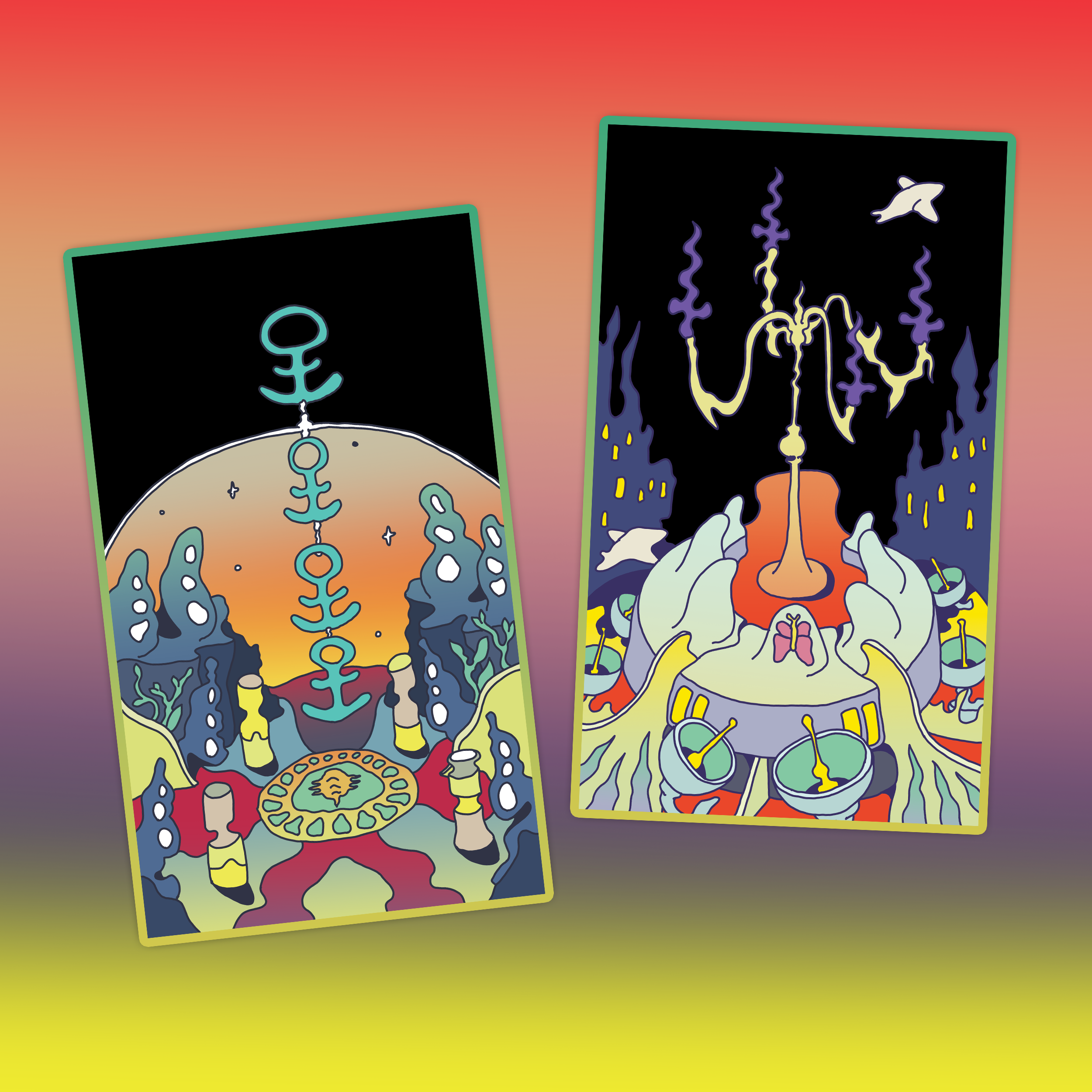 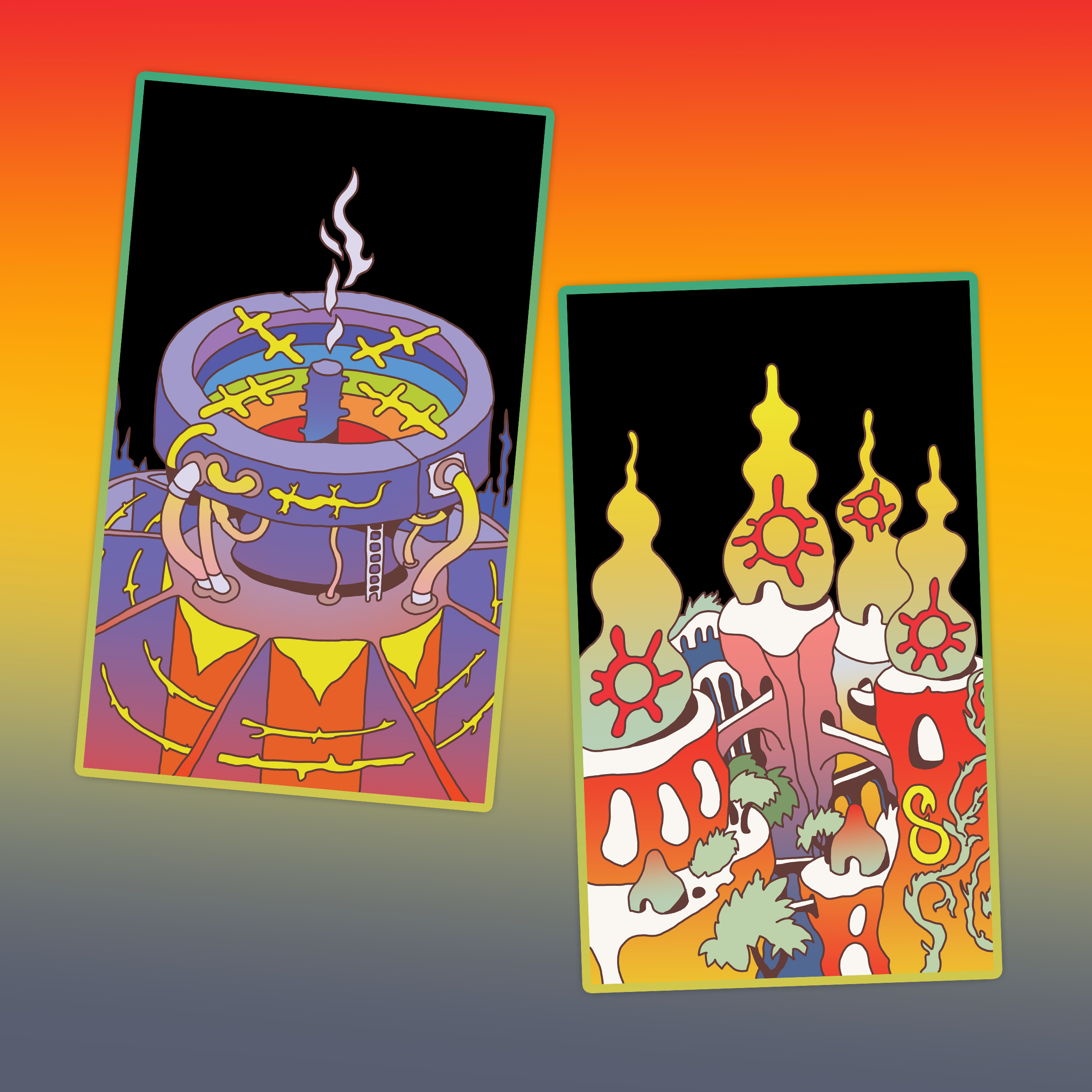 The City of Cups houses a large structure similar to a temple and an amphitheater, bringing emotions and thoughts in balance with each other. It's a place of communion and self-expression, protected from the outside by a large dome of glass. This card hints towards diplomacy and politics, and a stage of development where you can engage with society as a whole. It can represent a sensitive and sociable person. In it's downside, it can represent selfishness, withdrawal, anxiety and overwhelm.

The City of Swords culminates in a large antenna surrounded by beacons and satellite dishes, recording and sending signals in the universe in search of truth. It's a card symbolising reason, and a constant process of learning where it is key to always be ready to challenge your assumptions. It can represent a rational, stern or commanding person. In it's downside, it can symbolise tyranny, self-rightenousness, opression and control.

The City of Wands shows a massive factory or laboratory where things are constantly being built and generated. This card shows a very active process of leadership, production, boldness and optimism, where things are constantly transforming and changing animated by a tremendous force. It can represent a entrepreuneurial or creative person. In it's downside, it can show a domineering streak and a ruthless ambition, sometimes a destructive force.

The City of Coins is a sprawling, organic and intricate city full of towers, bridges, pits and forests. The town is abundant, safe, secure and constantly growing, in harmony with it's surroundings. It can represent a dependable and responsible person. In it's downside, it can represent an obssession for wealth and status, as well as unrealistic amibtions of power and glory.

That is all for now ✨
Closing on an overwiew of the suits :

Thank you for reading!

If you are interested in this tarot project, you can help by supporting it through Patreon! Patreon works on a monthly subscription basis, and allows you to get discounts on the finished deck.

related articles : work on the deck