Designing the minor arcana cards : Nine and Ten of each suit

The cards Nine and Ten of each suit share a similar overarching meaning as they close the suit before the trump cards take over :

Additionally, they also share the properties of their respective suits :

They can be read as the end of the cycle opened with the Ace of each suit : the Aces show the potential that can unfold during the sequence, and the Ten shows a potential result, with all the cards in between working as a story unfolding. I tried to keep this sequence in mind when designing the cards.

The Coins and Cups suits end on a positive note, while the Wands and Swords have a more challenging ending : Wands and Swords being associated with ideas and actions, they have a heavy emphasis on choice and free will, and thus tend to have in general much more ambivalent readings.

Following the Nine and Ten, we then open on the Court cards, which present us with different figures (the page, the knight, the queen, the king) who represent how someone can act within the possibilities of each suit : these will be the subject of the next update. 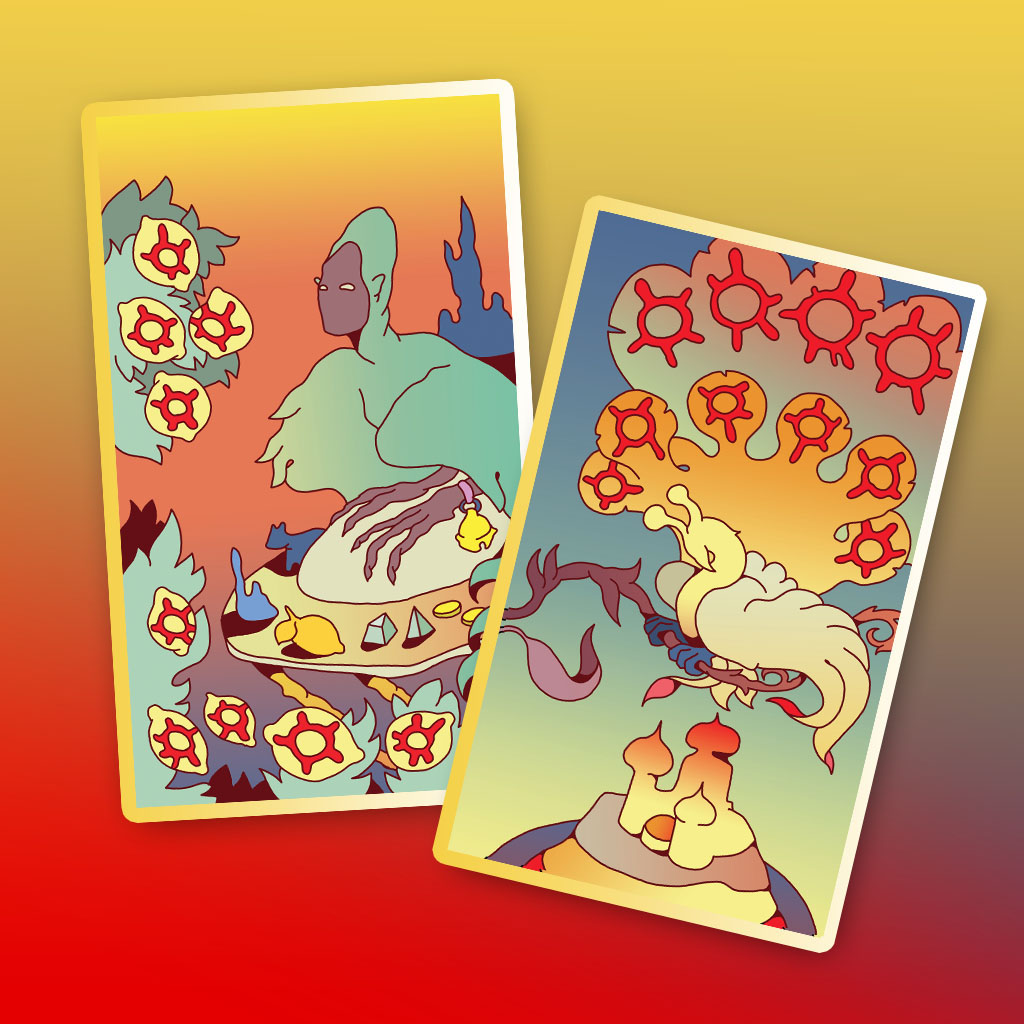 The bird in the middle of it's garden is enjoying the fruits of it's comfort. The tree bears numerous fruits, and we can see all their blessings lined up on the plate at their feet : shelter, food, material possessions, every single one of their needs is being met. In it's positive light this card can signifiy gratitide, fullfillment, whishes coming true, comfort, provilege and luxury. However, in it's downside, this card can warns us about excessive materialism, constant dissatisfaction, or superficiality : if we pay attention to the bell attached to the bird's feet, we can see that despite all it's blessings, it is still a domesticated creature.

This card is inspired by the myth of the firebird, and represents prosperity in the sense of legacy and tradition. What has been built is strong and rich enough to be transmitted and passed on, and goes beyong individual achievement to be part of a collective belonging. It can represent material affluence and generational wealth, but also ideas and myths being built and passed on. The downside of this card can be conformity, imperialism and conservatism. This card can also represent a business, venture or entreprise, or an organisation.

The Swords are an intellectual suit, and this card is a card of anxiety, worry, remorse, fear, regrets and overthinking. It represents a sense of impending doom looming over our heads and keeping us awake and vigilant, eating at our well-being and capacity to make sound decisions. This card can point towards something in our past bothering us, or towards a future we can't stop anticipating, making the present an uncomfortable place where our imagination invites invisible threats.

The bird is killed and the hunting dog is getting closer on the shore to pick it up : but the dog didn't have to kill the bird, as the bird has been defeated by a volley of arrows. If we pay attention to the preceding card, and we read this defeat as the consequence of it, we can understand that the bird had been killed by it's own negative thoughts and ideas, for which the swords painted on the arrows stand for. The scene is dramatic and romanticised with it's ribbons of blood spreading in the water : did the bird set up it's own demise as the final act of an orchestrated tragedy?

A learned cat walks on a goldchain around a green oak standing by the sea. The tree bears every fruit of every fruit tree, and stands at the middle of all the winds, where everything is calm, beautiful and prosperous. This is a card of emotional and spiritual satisfaction and peace. It can warns us against too much self-indulgence, and contrary to the Ten of Cups, it points towards an internal feeling of satisfaction which doesn't always match the reality of the outside and of others.

Following up the Nine of Cups, this card signifies internal harmony through contemplation and inaction. It doesn't promise us anything, but offers peacefulness, majesty and beauty, similar to the awe we feel when facing natural wonders. It's an harmony and beauty outside and greater than us that we can sometimes tap into.

After the Eight of Wands signifying change, we arrive in front of gates guarded by a three-headed dog. This card encourages resilience and persistence, and can signify roadblocks facing us in our path. We can also look at it the opposite way, and see the dog as guarding our own boundaries, filtering what we let through, protecting us from the outside world. It can also signify an internal resistance we cannot get through. Wether we choose to see this dog as our ally or our enemy depends on our current circumstances and the overall reading.

This donkey is carrying a lot on its back : the weight it carries might have been placed by others, or it can be responsabilities and duties it has taken on it's own. If we read this card as the conclusion of the Nine of Wands, we can reflect on how our boundaries impact the responsabilies we have to carry. Is the load on our back a curse, or is it the hard work necessary to carry out our plans? Is the situation playing out in our favour? Should we shed some weight or hang on in the face of hardship? This card can also be an invitation to delegate, to reach out for help, or to let go of things which no longer serve us.

That is all for now ✨
Closing on an overwiew of the suits : 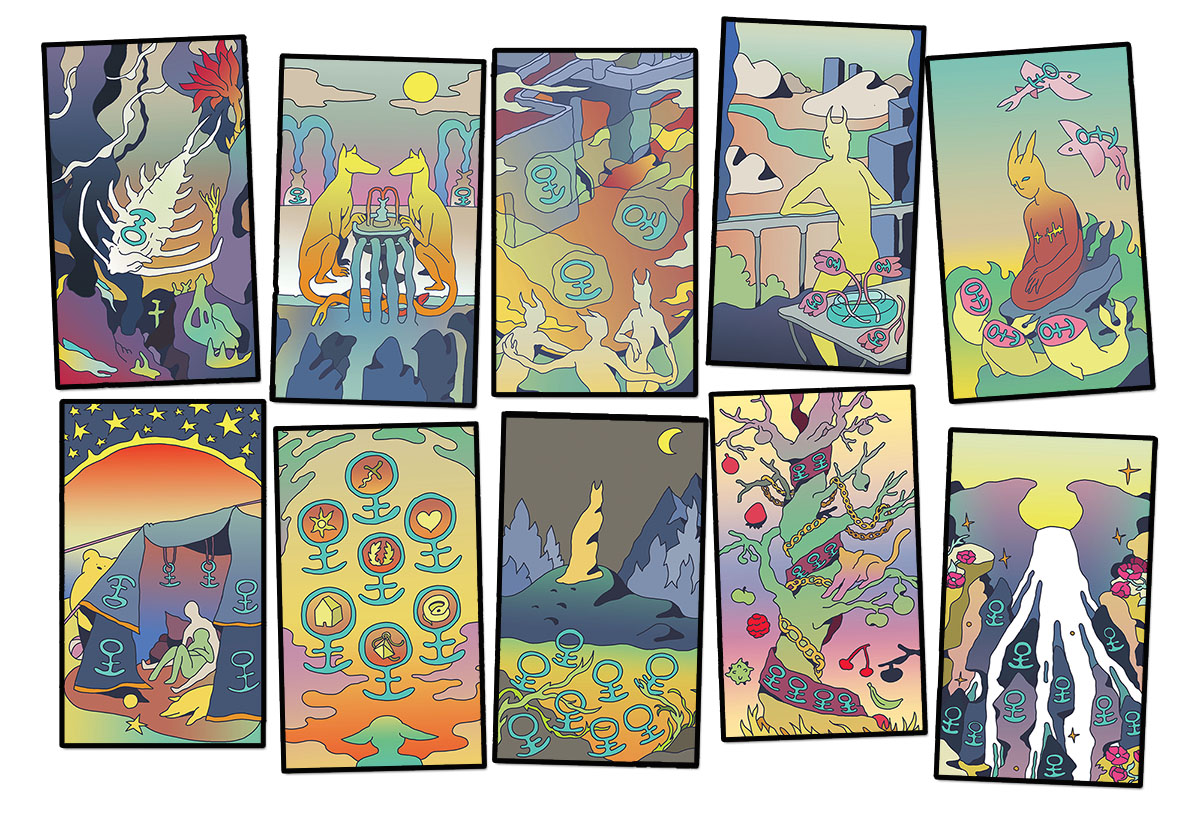 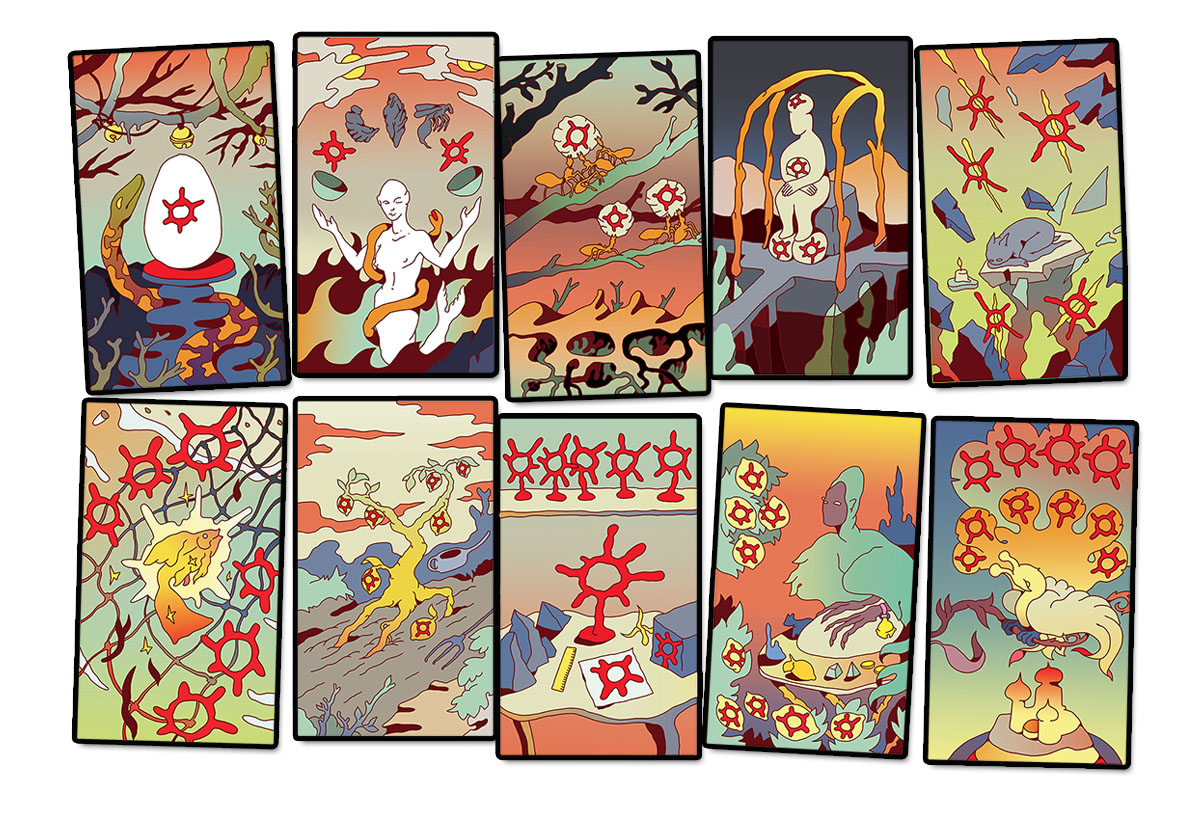 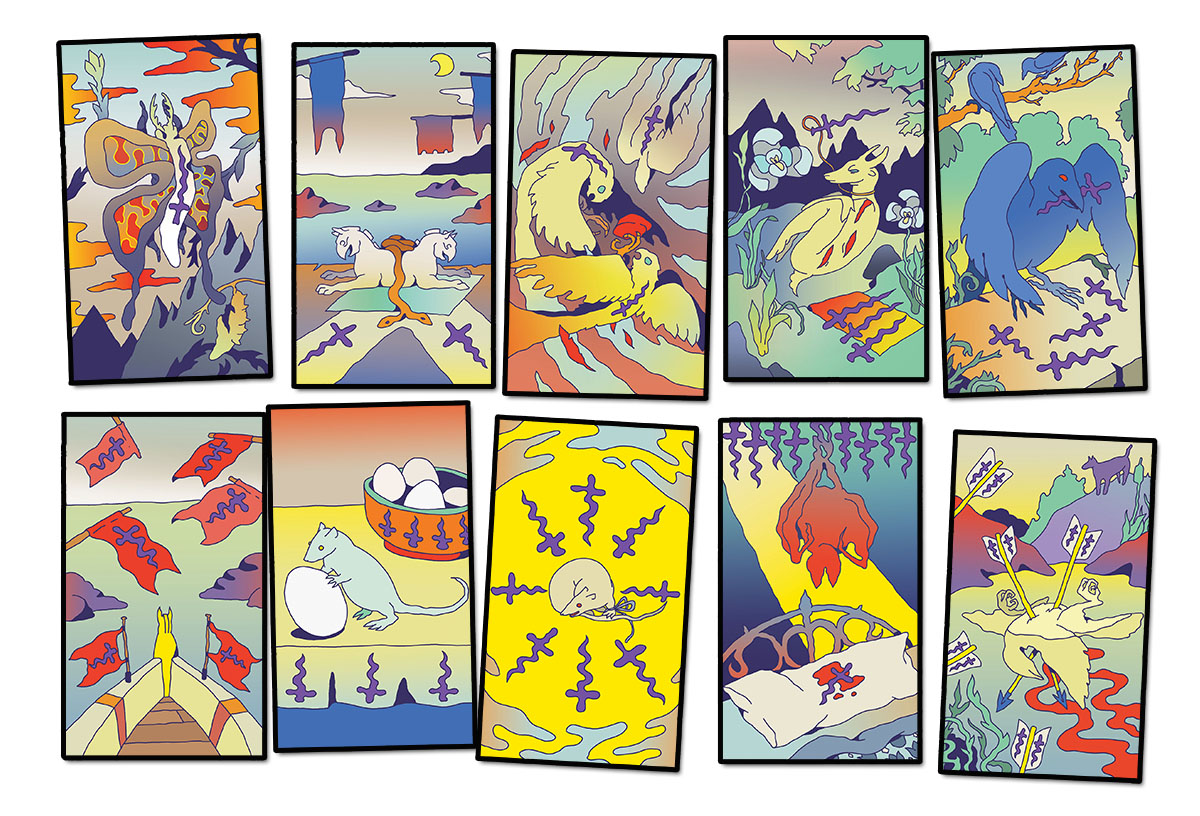 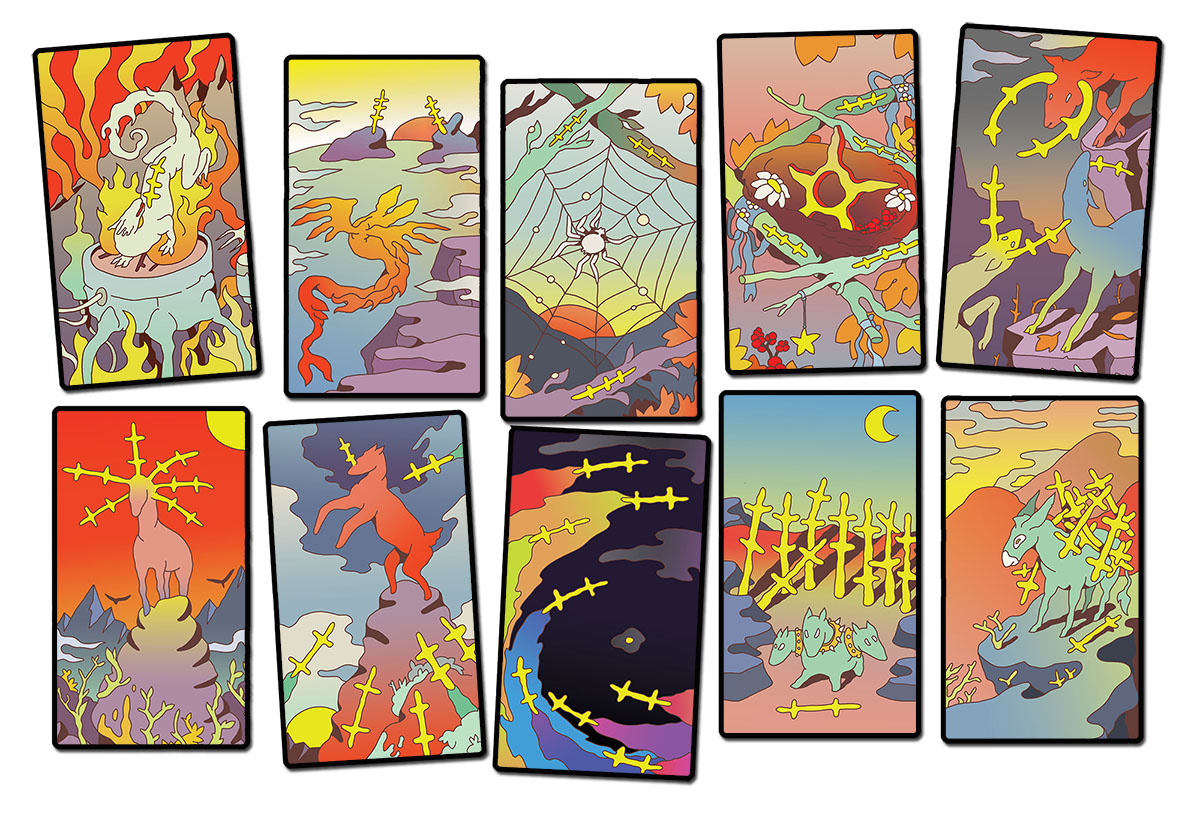 Thank you for reading!

If you are interested in this tarot project, you can help by supporting it through Patreon! Patreon works on a monthly subscription basis, and allows you to get discounts on the finished deck.

related articles : work on the deck